Skip to content
The Aeolian Archipelago’s volcanoes, therefore including the Stromboli, form the peaks of underwater elevations, rising from the depths up to 3,000 meters. According to the most recent theories, they developed because of a subsidence phenomenon, involving the African and Euro-Asian continents’ shelf, leading to the formation of a Calabrian Apennines’ chain.

It has been proved that in areas of pressure, where new mountain chains originate, volcanic activity is rather intense owing to considerable production of magma.
Stromboli has different morphological features: the ancient volcanic layer (Palaeostromboli), formed by the “Serra Vàncori” (924m), to the South and Southeast of the “Cima” (Peak) (918m); the present-day crater (Neostromboli), with five active mouths; the neck of Strombolicchio (57m). Researchers have singled out two cycles of activity: at the end of the Würn, between 40,000 and 12,000 years ago, the volcanic layer of Vàncori was formed and, subsequently, the Peak, (Palaeostromboli), further to the North. 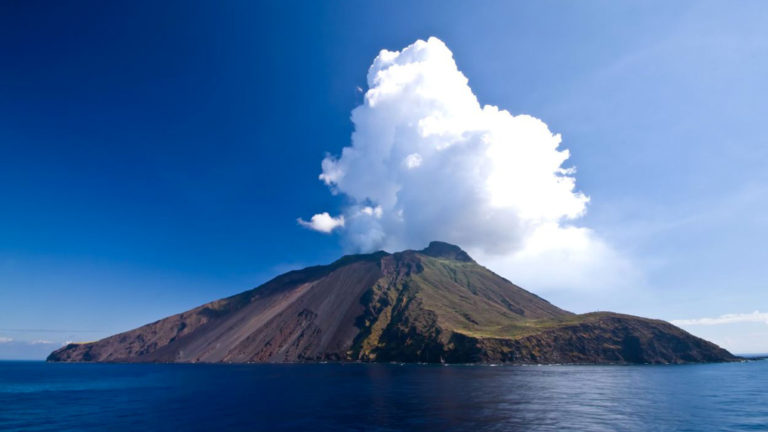 During the same era, Strombolicchio was created by a side eruption. During the second cycle, going back to the post-glacial period, the North-Western section of Palaeostromboli sunk into the depths, rapidly replaced by another volcano (Neostromboli), laying on the remains of the first. The currently active crater of the “La Fossa” volcano belongs to this formation.
Two thirds of the Island’s current perimeter are formed by what is left of the volcanic cone of Palaeostromboli. After millenniums, the North-Western section of Neostromboli also sunk and, consequently, the crater is now located on the edge of the slope, forming the inclined plane of “Sclara del Fuoco”. At sea level, this plane is about one kilometer long. The “Sclara” continues under sea level, up to a depth of at least 500 meters.
Stromboli is a classical example of a stratum volcano, having a cone shape and sharp inclines. Volcanoes in which lava flow and explosions of incoherent materials alternate (pumice powder, lapilli, ashes, etc.), come under this class of volcanoes.
aeolian islandsclimbing stromboliEolieStromboli
Condividi: